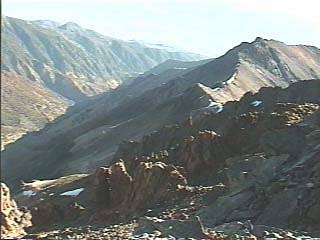 Dale Darby did a fine job of organizing a workshop in a most unusual setting. It is a pity that more IAAA artists did not attend. The high altitude Barcroft Research Station could have easily accommodated 10-15 of us.  This is one of the best sites I have seen for a workshop with comfortable dorm sleeping arrangements, superb cooking, heat and 110 volt power for slide shows, video, etc. Contrasting with the rather luxurious station is the stark beauty of everything outside the door.

The station is located at 12,500 feet altitude in the White Mountains on the east slope of California’s Owens Valley. The 30 mile drive to the station from highway 168 took two and a half hours, mostly on dirt roads. (I was only able to get my Dodge off the mountain by removing the air cleaner and propping the carburetor open with a bent paper clip until I got it down to about 9,000 feet.) Well above timber line, the area around the lab is tundra… bleak at first glance, but lush and varied upon close inspection. Those of us who enjoyed the Iceland workshop would notice a great similarity in the landscape. The lab is about 1,000 feet above the timberline. Timber in that unique area is Bristlecone Pine… the oldest known living organisms on this planet, some specimens dating back over 4,500 years. Severely weathered granite constitutes the obvious geology at that elevation. Boulder mounds protrude from the tundra and sand and weathered rubble repose in elegant hyperboloids which interconnect them, smoothly linking them to the chasms and valleys.

Clearly visible about two miles from the lab are sterile dolomite ridges which require little imagination to render as lunar terrain, which Joy, Dale, Bob and I all got around to. Beyond this geological analogue, I found myself captivated with the sense of isolation this lab conveyed in its remote and stark surroundings. The quonset hut and modular outbuildings and lab units nestled somewhat uncomfortably into the granite rubble of the slope behind a small plateau. The cylindrical hut had been modified and added onto many times. I was reminded of Antarctic bases, and found my imagination running to thoughts of Mars bases.

I did several acrylic sketches exploring this analogy and plan to use the photographs of the station as detail resource for Mars base paintings. More important than the literal visual detail of the structure was the feel of the station. To me, tuning in to that “feel” was the most valuable aspect of the workshop as far as anything that directly relates to space art. I found, however, that I was drawn to quite a different aspect of that landscape as I was there longer.

The four of us had hiked down from the station into a series of soft, bowl-shaped valleys punctuated with protruding boulder mounds.  As we watched Marmots waddle from rock to rock, I noticed the glint of obsidian flakes near me in the sand. On inspection, the area was littered with flakes bearing the distinctive conchoidal pattern of deliberate percussion. This was obviously an area where Paiutes had worked obsidian cores making arrow and spear points.

The four of us looked around the area for a while and eventually spotted broken finished points as well as abandoned points that had not gone well. In the midst of this nose-to-the-ground hunt, I looked up to see Joy in the distance motioning us to come over to the edge of a steep slope. Below her in a meadow was a Bighorn ram, rare this elevation in this season. I approached it with a video camera and followed it around the edge of the boulder slope for several minutes. Returning from this pursuit, I found Bob and Dale near another boulder mound pointing to a human femur they had discovered. This could be Paiute or the remains of a Basque sheepherder. We left things undisturbed and returned to the station.

In the evenings we watched Bob’s slides and my video of the Arches workshop and set up our painting studio in the well-lighted dining room. The other lab researchers and stall were asleep by 10:30 each night leaving us the run of the place.

Dale and I did quite a bit of work with Prismacolor pencils, both in the field and back at the lab. All of us used acrylics in the evening at the lab painting sessions. Joy concentrated on watercolors in the evening, departing from her usual technique of reverse glass painting with acrylic. Bob Kline worked on a very nice lunar landscape based on his graphite sketch of the Dolomite ridges.

Monday morning, the 4th day of the workshop, Bob left at dawn to rendezvous with his brother for a sail plane ride. Dale and Joy left a few hours later for the long ride back to Sacramento and Joy’s plane back to Portland. I stayed on two more days and focused my attention on the Paiute Indian presence in the area.

Talking and hiking with David Lee who has considerable anthropological knowledge of the area, reviewing books in the lab’s excellent library, and exploring on my own began to reveal fascinating patterns. On a plateau above the lab and the abandoned CalTech observatory, at 13,000 foot elevation with a powerful view of Mount Tom and White Mountain, are the highest human habitation sites yet found in this country. A chain of stone dwelling circles rings the base of a boulder promontory overlooking Owens Valley.

All through the region, Paiute stone hunting blinds are concealed in the boulders on both sides of any saddle through which the Bighorn sheep might pass. Revisiting the site where Dale and Bob discovered the femur, clever semi-circular stacks of stones can be seen on the boulder slopes. These were just enough to conceal a crouching Piute from the Bighorns as they moved upslope through the saddle. With a blind on both sides of these small passes, an animal would be subject to cross-fire. I had walked right past such a blind as I followed the ram that Joy spotted. Now I could see the wisdom in the location of the blinds. The ram had walked within ten feet of that blind himself as he hugged the boulders for camouflage.

Downslope from that blind, about ten yards, lay a beautiful chert point. Like a page in a mystery novel, it told a story of a missed shot from that blind at a ram like the one we had watched pass by. One could feel the twinge of the hunter as the point cracked on granite instead of thudding into flesh.

All through the area, these blinds became easier to discern. Associated with them, downslope, were beautiful broken points ranging from the elegant side-notch to the innovative Clovis style. This area had been hunted for centuries. I shot video and left everything undisturbed. In the evenings, David Lee and I looked at his drawings of Mojave petroglyphs and discussed the possibility of housing a desert workshop at the facilities of “his” reserve. I think it would be a perfect site considering the abundant planetary analogues of that region.

So, kudos to Dale Darby for organizing a good workshop in an unusual locale. Why weren’t more of us there? The facility couldn’t have been better. Charlotte’s cooking was gourmet, robust and plentiful. At night, at 12,500 feet, the stars blazed astonishingly bright. I stood in my Soviet Army coat, relic from the IAAA Crimea trip, as Bob handed me his binoculars and pointed me toward the center of the galaxy. My eyes swam in points of distant fire. I thought back over the 15 years I have known and travelled with you wonderful and quirky colleagues and missed you. More of you should have been with us on that high plateau, thinking of Mars and the universe beyond, surrounded by the highest early human habitation and the oldest living things… in a stillness that hung like a silent heartbeat in the thin air.