Monsoon-like storms of methane rain have created a flash flood churning through a river channel on Saturn’s moon Titan. As the liquid rushes along it picks up silt in the channel which turns it a murky orange color. The temporary falls spill over an eroded cliff exposing layers of sediments, hydrocarbons and rock-hard ices. 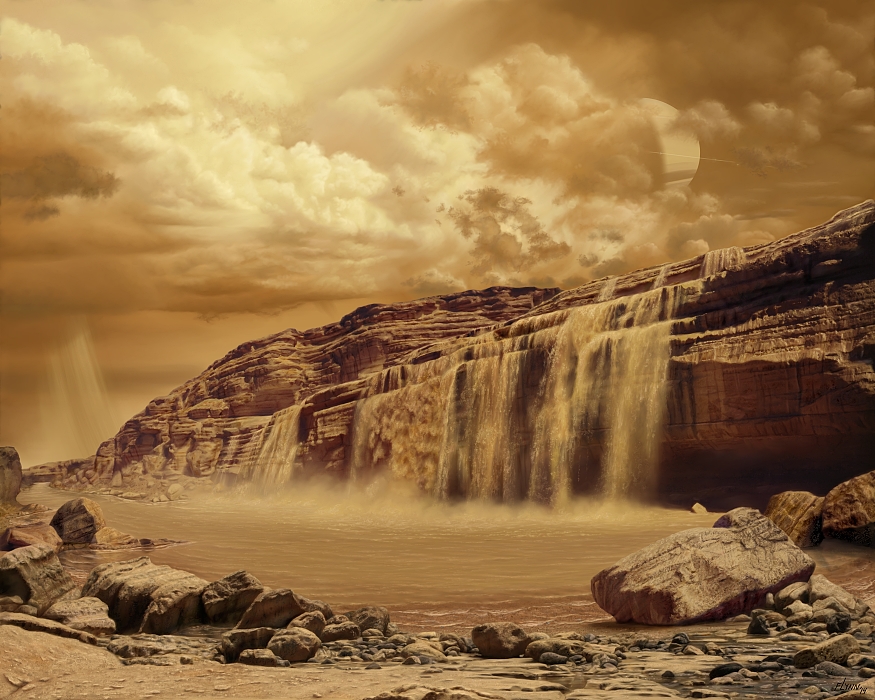 Marilynn Flynn's artwork has appeared in numerous books, magazines, TV programs, DVDs, science exhibits, art shows and websites. Her space art paintings are a blend of science fact, art and informed imagination. She is known for her beautiful landscapes of other worlds and her emphasis on the human perspective of space exploration. She started creating art at an early age and later combined her artistic talents with her dreams of being an astronaut. Marilynn's paintings have been commissioned by such prestigious organizations as the Earth & Space Foundation, The Planetary Society and NASA. Her artwork is in the permanent collections of several museums, including the Kennedy Space Center in Florida, as well as in private and corporate art collections. She was a member of the NASA Fine Arts program and documented the tragic Challenger 51-L mission. She is one of the original founding members of the International Association of Astronomical Artists, and served for several years as the organization's first elected Secretary. Although she hasn't made it into space herself (yet), in 1995 her painting of "Cosmic Cauldron" was selected as one of twenty paintings that were launched to the Mir space station, where it orbited Earth for several months as part of "Ars Ad Astra", the first group art exhibit in space. Go to the artist's portfolio

This artwork is copyright © Marilynn Flynn. All rights reserved.