Medium: fluorescent acrylic with PVA applied pink cotton wool on A4 acrylic paper, Diameter of floating “telescope aperture” mount-board cut out: approximately 14 cm, Dimensions of black outer frame: approximately 31cm x 40cm. Note: A descriptive text box below the circle was included in response to frequent suggestions from various people that a description would be beneficial for understanding what they were looking at, increasing the size of the frame. My father and I jointly purchased a second-hand hydrogen-alpha solar telescope around a decade ago; the first time I saw the Sun in this way, it was the first time that it truly looked like a star, reminiscent of images from famous space-based observatories. I have relied on memory alone to produce this interpretation inspired by the experience, allowing over embellishments to creep in, probably influenced by such images. I also feel that I have overdone the sunspots and activity generally but the attempt to capture something of the colour remains a part of my (limited) observing experience, as well as the intensity of the colour, which is inspired by the memory of the piercing brightness. Also, during one observing session, I was inspired to experiment with tiny strands of pink cotton wool, applied with PVA glue for the prominences; initially I thought this was quite effective but over time there has been some sort of reaction with the dye of the cotton wool, turning it yellow; that’s what you get with experimentation… If I can get sketching the Sun at some point, with some guidance tips to help with that, I think I can develop this a lot more; I need not remind anyone that I intend to approach this as safely as possible and take all the proper precautions when observing the Sun. However, for the time being, the solar scope is in my dad’s safe keeping and we are both practicing social distancing until conditions improve. But there is nothing to stop me from starting another version inspired by the fairly recent solar transit of Mercury we were both very lucky to glimpse on a mixed cloudy day. My dad took some good smartphone shots I was able to clean up, which I can use as a very rough guide. I also clearly recall that there were no prominences or sunspots that day while we were looking, so the only effect I need to try and think about for this next solar transit painting, is how to get the granulation texture with acrylics… Note: This painting also came third place in a “photography competition” at my local astronomy club (The Cotswold Astronomical Society) a few years ago because they were keen to feature one of my works… 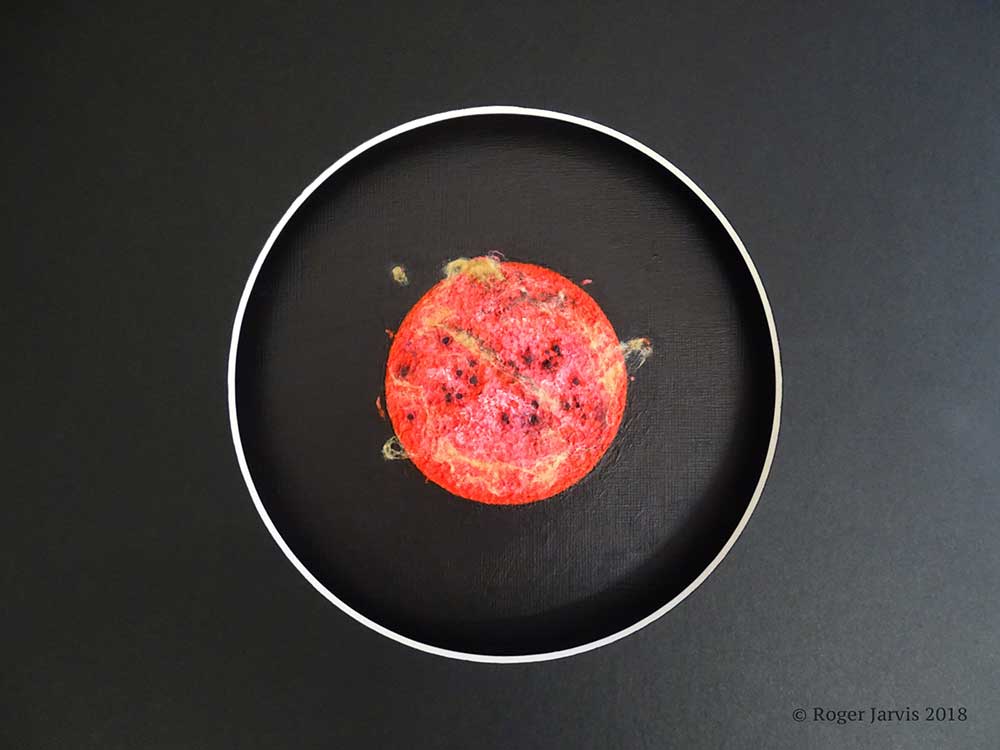