Medium: acrylic on A4 acrylic paper, Diameter of floating “telescope aperture” mount-board circle: approximately 14 cm, Dimensions of black outer frame with protective glass panel added later: approximately 31cm x 40cm. Note: A descriptive text box below the circle was included in response to frequent suggestions from various people that a description would be beneficial for understanding what they were looking at, increasing the size of the frame… This is a highly improvised first attempt to create a painting inspired by direct observation, since the sketch I made at the telescope, that this painting is based on, was only a “napkin doodle” done in a very rushed way, out in the cold and dark, distracted by creepy noises! This doodle was useful for getting the relative position of things roughly mapped out but otherwise not much of a sketch, so I improvised a lot, mixing rough memory with the study of amateur photos to turn it into a workable art; with more practice and some guidance tips I should hopefully get better at this and observing more often, which I find difficult, would help to develop celestial observation more, as tell-tale indications have previously started to show. However, after I finished this painting and held it up under red light next to my small driven 5-inch table-top Newtonian, (adapted to sit on a sturdy camera tripod), I noticed that some of the stars and asterisms around the nebula roughly matched some of the dots in this painting. And it was just then that it struck, a sudden chill running down my spine: one was merely an artist’s interpretation, but the affirming source was the reality to which it points… Even harder to imagine, is that thousands of worlds are (likely) located in that tiny grey smudge… I find it most evocative when I use my peripheral vision on this painting, since this is the only part of vision sensitive enough for detecting the light of very faint deep sky objects. In future I will stop using larger dots to convey visually “brighter” stars, now that I have started using shades of grey to knock fainter ones back, to keep them point-like and more realistic… 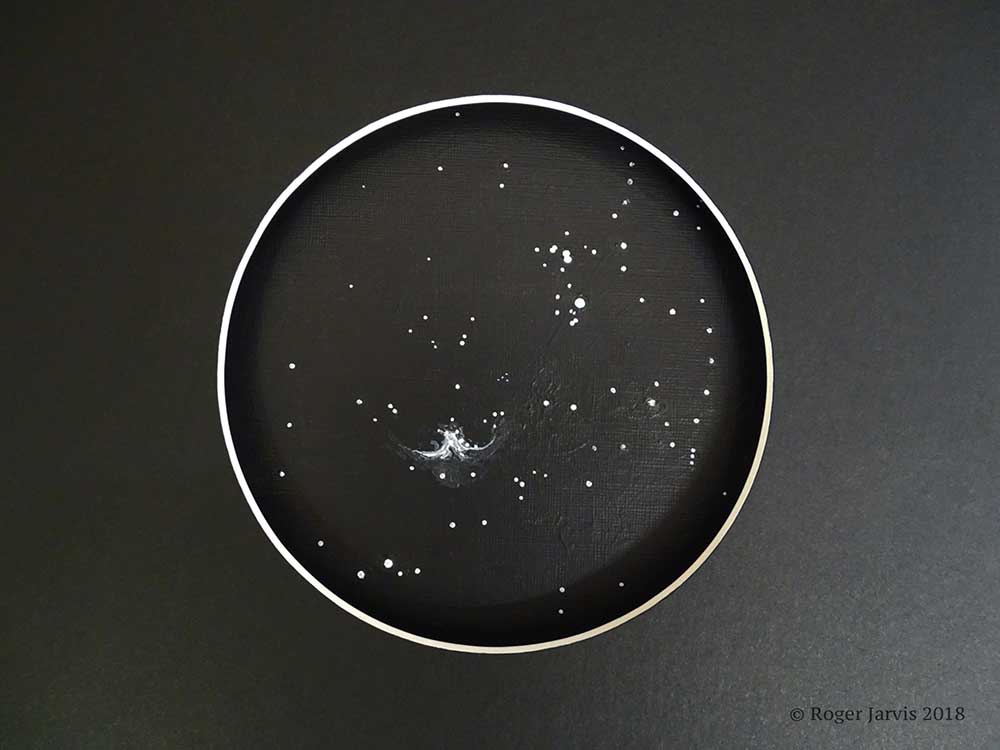