Size of canvas approximately: 51 cm x 40.5 cm, medium: regular and fluorescent acrylics. I have already shown this painting previously but am re-posting it with some minor changes I needed to make – and also because I would like to keep it in my portfolio… Although I finished this painting in 2018, I completed most of it before I first joined the IAAA in late 2017, which is very significant because up until then I had no access to any kind of feedback from other (vastly more experienced and developed) space artists. So I was relying very much on feedback from local friends and members of the public, most of whom knew either very little to nothing at all about astronomy/astronomical phenomena; this presented a very significant challenge in painting a black hole binary system that they could recognise or perceive in context, since they were in most cases completely unfamiliar with the general visual characteristics of the subject matter. My aim is also to share this subject with those less familiar because it offers a sense of wonder and mystery integral to this life and reminds us what is so easily forgotten when the mind becomes very retracted or inward looking and we stop being curious; I know because I have lost it before and found it again and even something so familiar and ordinary as simply seeing the Moon after three years of hard study on my art degree, forgetting to ever look up at night, suddenly takes on a deeply ineffable quality… Something very curious happens when people are greeted by a representation of something very unfamiliar to them, although I can also attribute some of this to my swirly abstract way of painting it: They either feel very unsure what they are looking at or, the mind accesses its memory inventory of previous experiences and makes a visual association with something else, such as a “protoplasm”, etc, etc, etc. Initially I tried to resist this tendency by adding more and more visual clues that this is a painting about outer space, instead of simply leaving the painting alone as a finished piece; I kept feeling like it was something I wasn’t painting clearly enough and it needed “more” but this only succeeded in a runaway insecurity that caused me to completely overload the composition. I have since learned from this, and from previous feedback from the IAAA, that I need to let go and just paint the subject directly. This experience also shows perhaps how closely tied or dependent our perception of form is on the language through which we experience the world; name and form not being separate. As in other paintings featuring fluorescent acrylics, there is again an inspiration to convey a feeling of inexhaustible energy, animating all phenomena; that the artwork itself is of this nature, not separate… 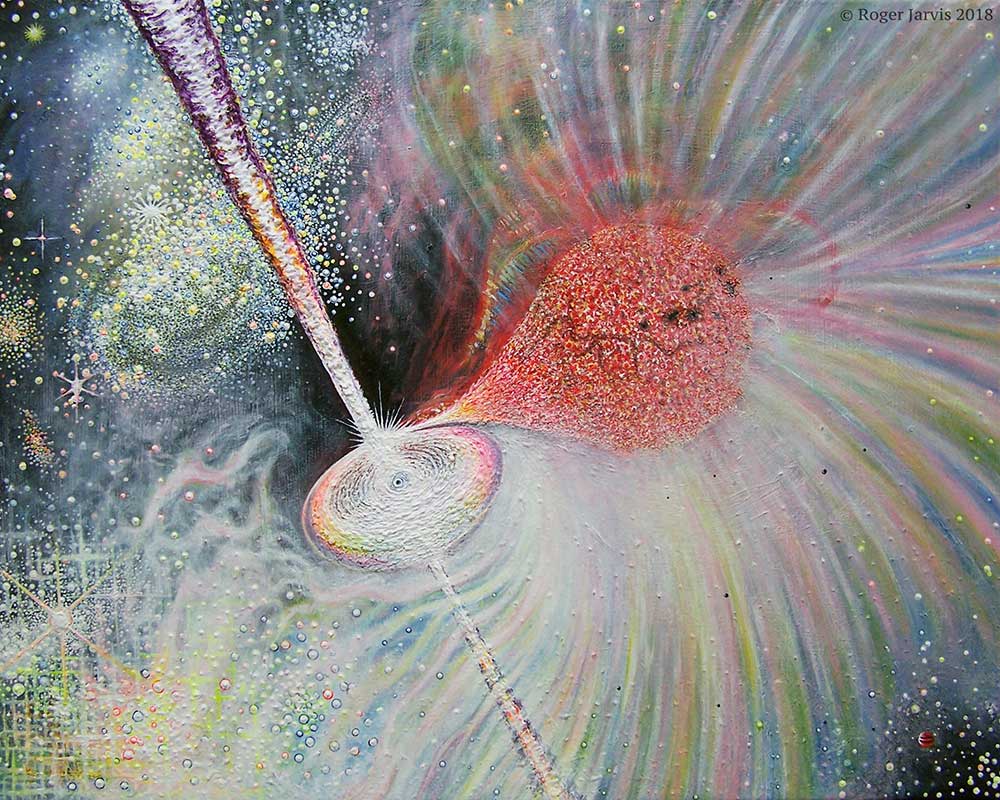