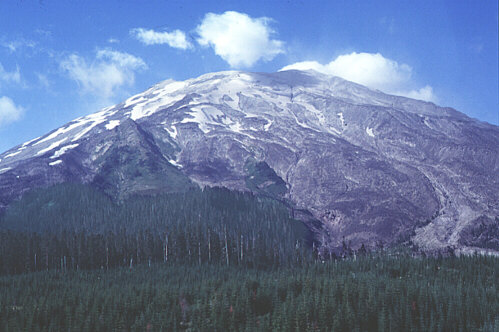 Report by Joy Day (the Hostess with the Mostess!) 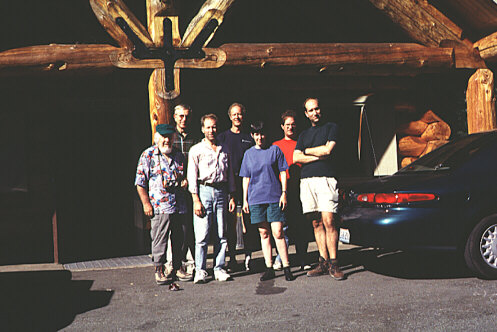 The IAAA workshop up on the stunning volcano of Mount St. Helens in Washington State was a resounding success! Everyone there loved the scenery, the friendships that developed, the professional encouragements and critiques, and are inspired to go forth and make some more stunning art! Even with a few personality conflicts, everyone had a great time, most of the time. We have over 1000 photos taken at the workshop. We are working on putting together a website with a detailed review of all the wonderful things that happened up there, including sketches and paintings that were done on site and after. The workshop began on Sunday with a get-acquainted dinner near the Portland Airport (also known as the Hamster Maze). We all (except April, who was meeting us the next day) had a great time getting to know each other a little over some enormous plates of dinner. We agreed on a Very Early (some will say not early enough!) departure time for the following morning, the first day we’d see Mount St. Helens!

The following morning, some of us arrived late (Sorry, my fault!) and then begun the process of dividing up the load of suitcases, mats, sleeping bags, jugs of water, food and supplies. Somehow, we managed to get all that stuff into three cars (well, a car, a jeepy thing, and my awesome purple pickup truck) – this was a camping trip… why did one guy have six suitcases??? 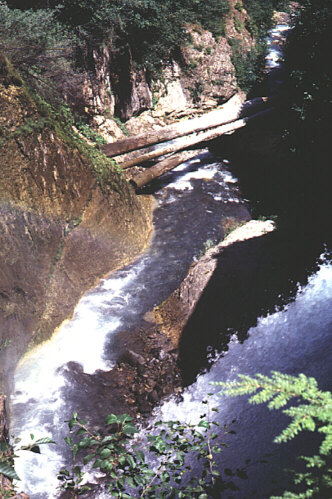 We made our way up to the cabin halfway up Mt. St. Helens. It was an incredible cabin, with picnic tables, a woodstove (that really worked well!!! for heating, anyways, not as good for cooking on….), clean potties right next door and a huge parking lot that we could get a ton of sky visible in. The first day was spent exploring the enormous lava tubes and lava forest that was only about a 5 minute drive from the cabin. The lava tube was named Ape Cave and the sound of those apes could be heard as our group made it’s way down to the very end. We all had a great time seeing the wondrous lava flows and the new forest that has grown up out of it. We spent the evening after dinner driving as far as we could up the south side of the mountain, looking for the best spot to capture the sunset on the mountain. Of course by the time we found the best spot, the sun had already set!! We marked the spot to hit the next night! We returned to the cabin, set up the Celestron C-8, and laid out on the asphalt parking lot (!) watching the peak of the Perseids meteor shower and yakking until the wee hours. After far too little sleep, we were awakened by the strange sounds of the forest animals as they wandered out and around the cabin. Jon had volunteered to take charge of cooking some wonderful meals for all of us, and he did a magnificent job!! Working with one frying pan on a lukewarm woodstove, he managed to make us pancakes before we headed off for the far side of the mountain. 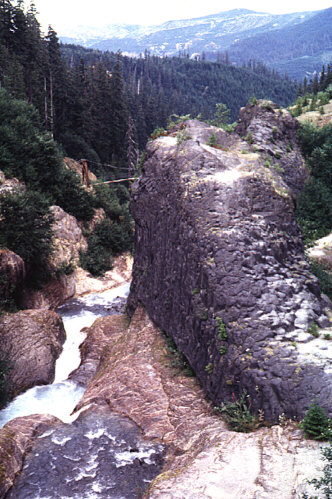 It was a long hot day as we drove around the south side and up the east side of Mt. St. Helens, into the destruction zone. There were plenty of scenic stops to make along the way, as we saw more and more blasted down trees, scraped bare hillsides and filled in canyons. We finally got to the end of the road at a great spot called Windy Ridge, and they aren’t kidding! There were times we were leaning into the wind and hardly able to walk. The viewpoint looked down into the newly 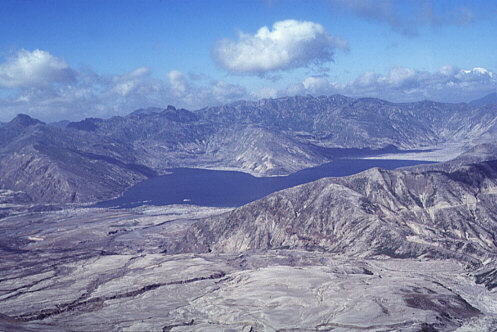 formed Spirit Lake, hundreds of feet above where it originally was. The lake was choked with blasted logs, completely burned free of their bark. It was an eerie sight to behold. The flow from the eruption was clearly evident in the way the trees were patterned away from the dome. They formed lines pointing directly away from the caldera. Huge trees were completely uprooted, or simply broken off at ground level and burned clean by the amazing power that day.

It was an awe inspiring sight to see. Some of us sat and sketched it or took photos, some of us hiked to get closer to the lava dome. Everyone was moved by the sight of aftermath of that explosion. Oh! The sunset! It was too late. One more day to try it. Again that evening, we lay on the parking lot (this night, we were smart enough to bring out our pads though!). We watched meteors and discussed a myriad of topics as we looked up at an incredibly dark and beautiful sky. The next morning, which again came after far too little sleep, we were headed out for a full day of basalt cliffs, lava flows and river canyons. The muddy river canyon had been covered over with flows and then forest. When the mudflows swept through, it cleaned out the stunning river canyon that was there all the time, just 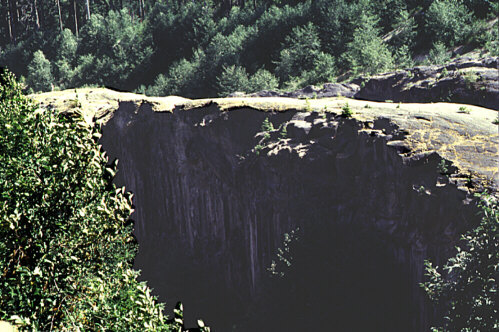 hidden. We hiked down to the river, climbing around on the boulders and peeking over the edges of basalt cliffs with the raging river tumbling down in gorgeous waterfalls next to us, and rainbows appearing at the bottom of the canyons. We hiked, we sketched, we photographed, we soaked up the beauty and became great friends.

And then there was the Bridge!! A wonderful suspension bridge straight out of Indiana Jones movies spanned the canyon. It was only a few feet wide, and several hundred feet up in the air. You could easily see between the slats down to the waters crashing on the rocks below. And boy could that thing get swinging!!! 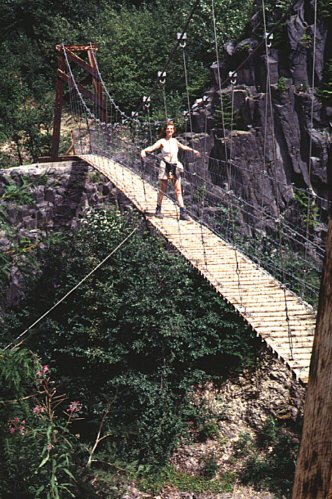 I had a fabulous time getting that whole bridge to sway and roll. Great fun!! We couldn’t quite decide if it should be called the Indiana Jon Bridge (for Jon Ramer), or the Indiana Johnson Bridge (for BJ Johnson). Since I’m writing the report, I get to choose and I personally prefer the Indiana Joy Bridge. Oh! The sunset! After much hoohah getting everyone back to the cabin and having some dinner, we finally made it to see the sunset on the peak of the mountain. What an amazing sight – the whole volcano lit with a tender rosy light. That evening again, we lay out in the parking lot, with pads and sleeping bags, yakking and telling hideously awful jokes and puns until the wee hours of the morning. The following morning was a sad one indeed as we packed 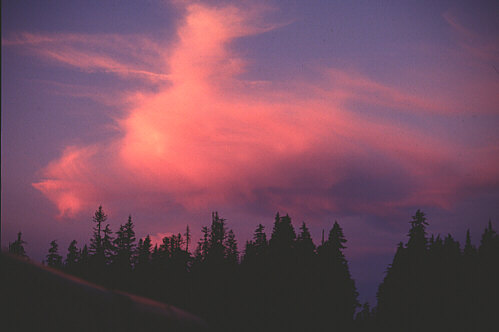 everything back into the cars and headed off our respective ways, ending an exciting and invigorating workshop and saying goodbye to the artists that we’d become incredibly close friends with up on that volcano. We were all inspired by the scenery we saw, the friendships that so quickly grew. It was quite a successful workshop, and one I’m glad I didn’t miss.

Workshop Addendum: After the workshop, BJ and I headed back up the mountain to check out of the cabin and clean it all out. We decided to charter a helicopter to fly us into the caldera. It’s a good thing we had time to wait — it took two days for the winds to subside before a short window of opportunity came up that the helicopter

flight would be possible. We were flown into the caldera, and around the back of the steaming lava dome. It was impressive, majestic, frightening, and not even 100 feet away from us. BJ spent all of his time looking through the viewfinder and realized when we returned to base that, in a sense, he’d missed it. He was out of film, away went the camera, down went the credit card and we went again—just for the ride…. 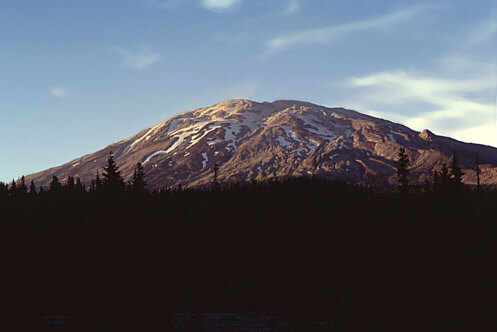 Mt. St. Helens from the south. 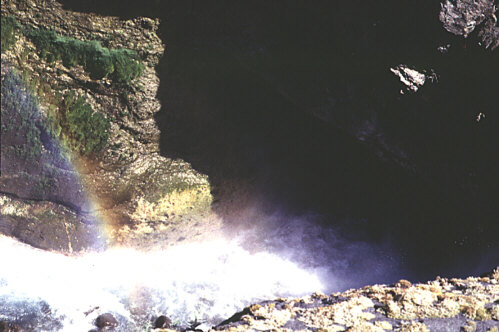 Rainbows down the waterfall. 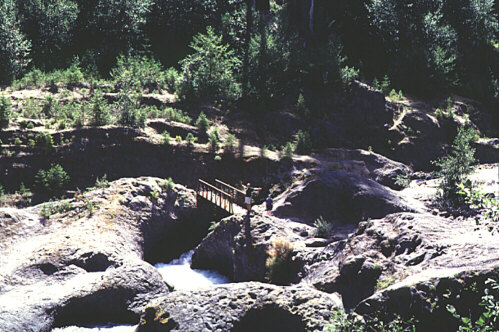 Jon in a flawless swandive. 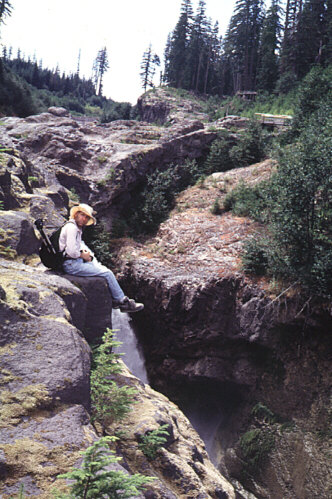 BJ hanging his feet into the canyon. 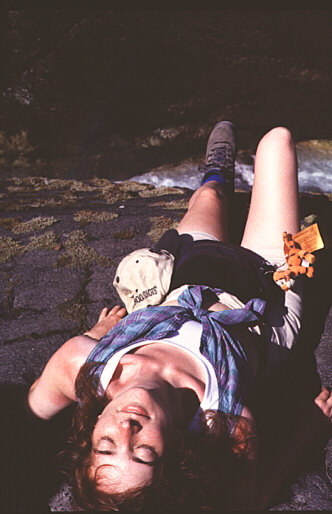 Joy, having too much fun. 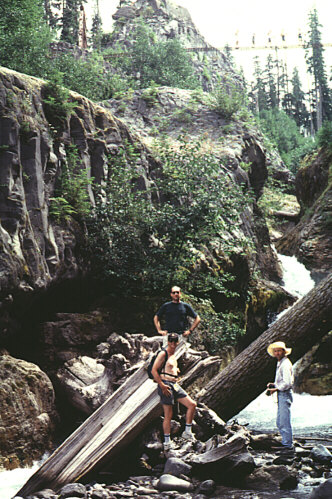 Jon, Steve, and BJ under the bridge. 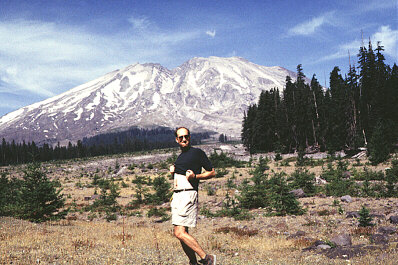 Jon showing us he’s a ham. 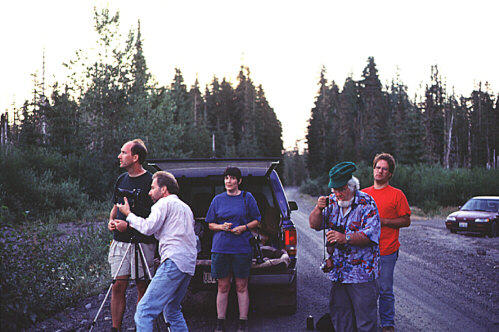 Getting ready for sunset photos. 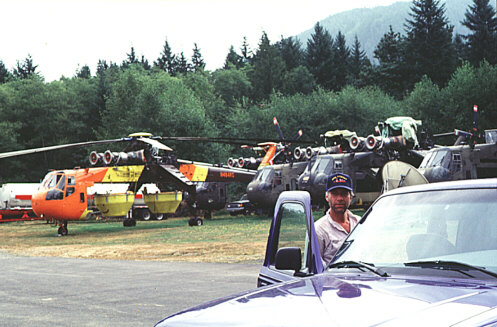 BJ and a smiley chopper. 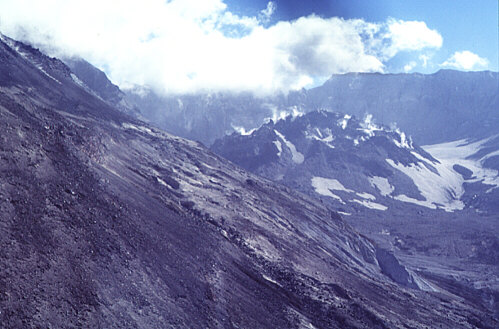