Mars in late October 2005. I shot this image of Mars during the 2005 close approach. It is a stack of 1200 frames averaged together to eliminate noise and enhance trey detail. I used a Celestron C8 scope and a Sony camcorder. I mounted the camcorder to the telescope eyepiece with an adapter, then used the Sony’s optical zoom to enlarge the projected eyepiece image. Shooting video at 30 frames per second quickly gathers a lot of frames. About 1 minute of footage was split into individual frames in stacking software. I used a comparative sorting algorithm to cull out the blurriest frames, then aligned and stacked the remaining 1200. The resultant image was processed by optimizing histogram values to preserve the captured color, using Laplacian pyramid sharpening, wavelet noise reduction, then final Photoshop processing. 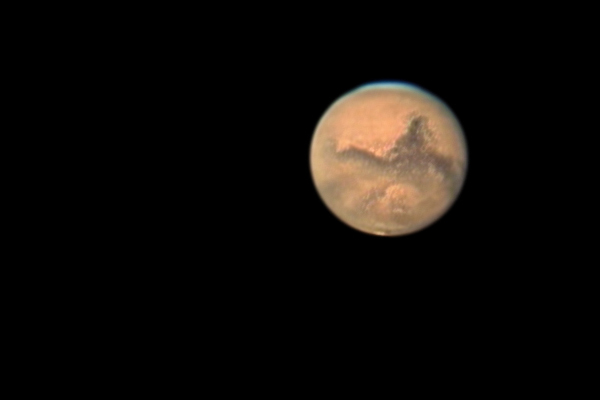 An award-winning artist and animator, Joel Hagen is a founding member of the IAAA. He is a MER collaborator, part of the Opportunity rover science operations team and has produced image products for the Opportunity, Phoenix and Pathfinder missions. A retired computer graphics instructor, Joel works with digital and traditional media as well as 3D printing and print surface treatments. Joel also designs extra-terrestrial life forms and biomes. His work has appeared on PBS, BBC, NHK in Japan, Discovery and National Geographic channels. Go to the artist's portfolio

This artwork is copyright © Joel Hagen. All rights reserved.