In high school, I had a vision of a type of art I wanted to do. Several Years later, after study and learning the tools I would need to create such visions I started painting in a style that I called Astrosurrealism. I also worked in many other subjects, but this was where I could explore archetypal ideas and deeper wordless thoughts. Knowing space as I did, it was the perfect medium of the most beautiful and the most permanent of structures, forever unchanging and never out of style. Remembering Carl Sagan’s reference to this universe as the component structure of a larger one, my imagination was already piqued for such visions. “Like Grains of Sand” was a more literal vision of the concept of number and scale of the universe’s zoo of astronomical objects from stars, gasses, energies, events, and forms. My study of space science had me better understand the medium of stars and nebulae, and while my art explored Astrosurrealism, astronomy would also inspire the visions of other worlds and places we would only possibly see in our distant future. The literal universe would always test our knowledge of reality. Each new view expanding understanding. A William Blake poem starts with the line that inspires the vision. “To see a World in a Grain of Sand and a Heaven in a Wild Flower, Hold Infinity in the palm of your hand And Eternity in an hour.” Acrylic on Illustration Board Circa 1985 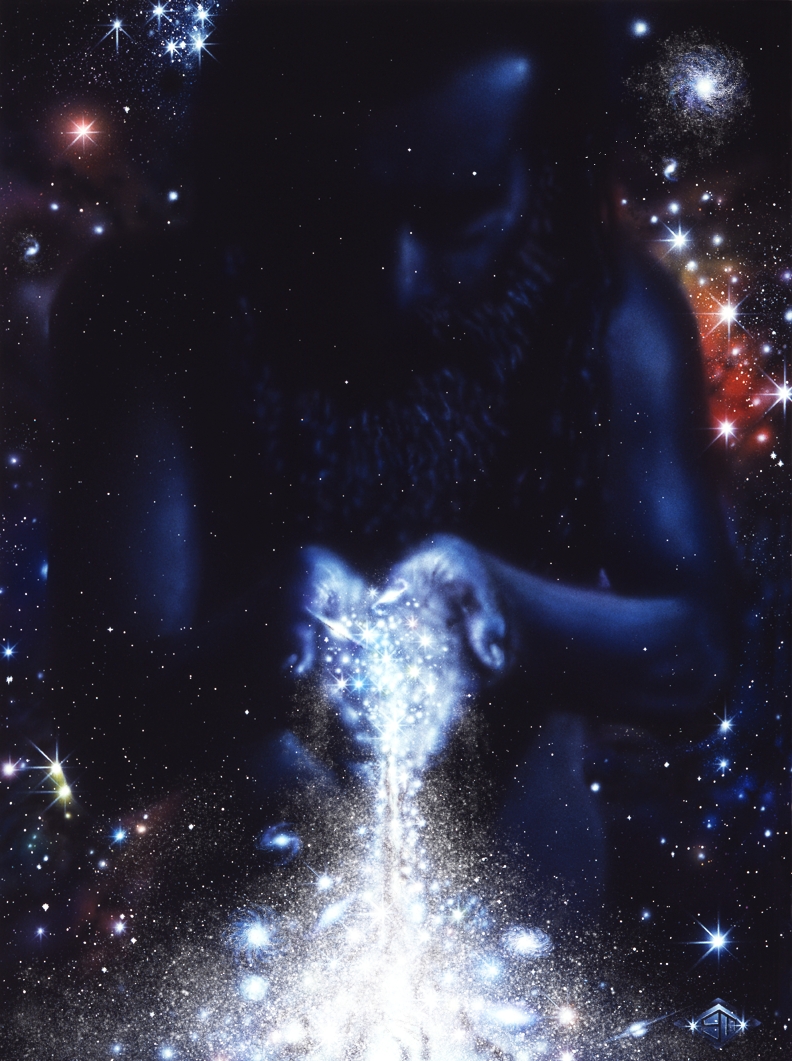 I began drawing, painting, and working creatively as a child like most. Evolving from drawing on walls and floors to the back of test papers in grade school. I was of course exploring mediums yet also designing and constructing with anything from crafts to toy construction sets. School was painfully boring and while I had great ability was stifled by the linear way learning was wrongly presented to me. I confirmed that fact in college. I found I had had ADD before it was discovered. It was called “not paying attention” back then or much worse. But there were advantages I found creatively in learning to compensate. Music and Art made it possible for my highly active wandering imagination to focus.

Winning competitions in school I continued to do artwork but also loved the sciences, that later in my young life would benefit other skills as an artist. Science Fiction was the best of imagination and the best of science if done right and I loved it. My obsessions moved into more actual space science continuing my lifelong interests in space, cosmology, and I became a fan boy for the constant discovery science would bring. I followed the space program as a scrap-booking boy and scanned everything to memory.

I trained as a graphic designer and illustrator and after some college and working for printers and typesetters I learned professional skills that would expand my freelance abilities. I tried as many things as I could and trained in television production and news media, print brokering and print. I had some world class teachers too. Training early in the late 80s and early 90s for prepress I wanted to gather knowledge of digital visual technology so in expression I would find less resistance. Creative ideas need solid technical ground to be expressed clearly. Clarity I knew was needed to educate the species.

Science took the place of fiction for its wonder, depth, and a tangible experience. I continued interest in general sciences where related to space science while in the study of philosophy, anthropology and most the sciences that described reality as we so far had experienced it. Psychology & Cognition found me exploring the limits of perception too, understanding the camera we are. Inspiration was everywhere, and if I could find no science, I would take available data and artistically extrapolate to go places yet imagined. Astronomical subjects begged for more visuals, then Hubble took care of the basics.

The rewards of learning while working were perfect for me as I wanted to understand and after a while could speculate visually. Astronomy and other hobbies meshed with the artist in me and I found true vision through study. Working for NASA as a contract illustrator I was able to take all my knowledge with me and working with the people making the dream to take us beyond the nest, I found home in action with my creative visualization. I could help the effort as I saw friends doing also. My work felt relevant.

My artists path is a personal and a spiritual one. I want my work to help inspire a deeper awareness and love of the world. I have been published in the US, Europe, and several other countries with covers and illustrations for books, magazines, cards, posters, albums, and more. My art has exhibited from coast to coast in galleries, museums, institutions, corporate and government facilities. I was one of the first published digital illustrators, even winning an international award at Siggraph in 1985. My professional life has been as an Art and Creative director and Producer for dotcoms, and contracts for corporations and institutions. There is much more that need be done. I hope to continue to help. Garret Moore 2021 Go to the artist's portfolio

This artwork is copyright © Garret Moore. All rights reserved.