Medium: acrylic on A4 acrylic paper, Diameter of floating “telescope aperture” mount-board circle: approximately 14 cm, Dimensions of black outer frame with protective glass panel added later: approximately 31cm x 40cm. Note: A descriptive text box below the circle was included in response to frequent suggestions from various people that a description would be beneficial for understanding what they were looking at, increasing the size of the frame… This painting, inspired by observations of Jupiter, began much like my Saturn painting in another post, in that being an early attempt, I chose not to focus on the stars but concentrate on the planet and relative positions of its Galilean moons; this was just a quick napkin doodle at the eyepiece, not a proper sketch I might add, but a useful positioning of dots at the time of observing! However, after putting it away for a long time and taking it out again, the empty space felt a bit too “empty”, so I took the choice to stop being quite so pedantic about remaining absolutely true to my recording – and put in some imaginary stars to break up the black. Immediately I encountered my original concern in doing so, which was that the moons, being tiny points of light themselves, might get confused with background “stars.” This is partly why the moons are represented using larger dots to make them stand out more and the background dots are in grey rather than white to knock them back slightly; in future I am considering abandoning the use of larger dots to convey brighter objects because if I can try to keep everything point size, it will look more realistic (I could make the stars really dark so that point size moons can stand out more). I would add that the stars were added much more recently, and the year shown is according to completion… Admittedly, as with any painting – and as I have previously seen commented on the IAAA discussion list, there has to be a compromise between painting what I “see” and producing something that looks aesthetically interesting, aside from the unconscious tendency to over embellish the details and colours. And on top of all of that, I cannot help being a bit of an impasto, textural, swirly; these things are rather ingrained from quite some way back. Even so, I have tried to exercise self-restraint in the size of the disk, (not in any technical way) and in the colours and level of detail I have shown to produce an interpretation that I can at least say is derived from an experience. Although, the mediation of the imagination is virtually impossible to escape completely; in the end this painting is an invitation to those who might be tempted to seek some form of answer in this image, to go out and look for themselves, for “the finger that points to the Moon, is not the Moon itself”, to borrow from a Zen saying. Apart from this, I can only try to keep practicing where I can and develop observation more… 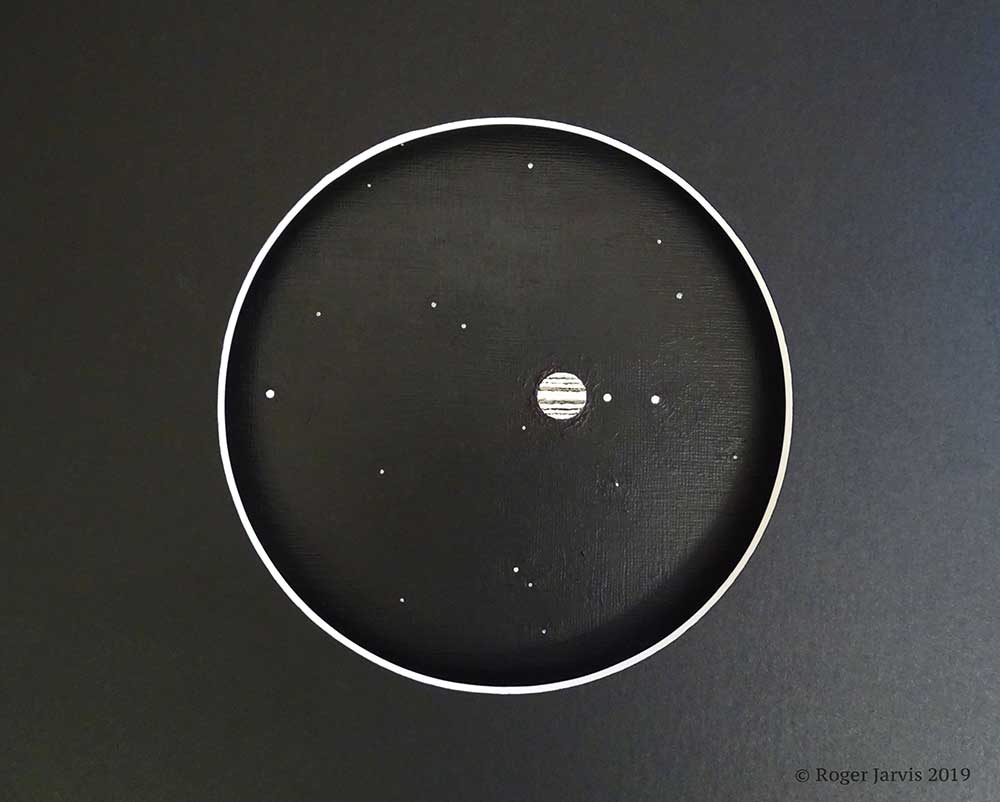