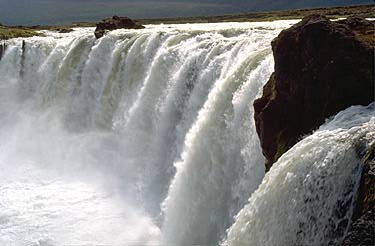 Glaciers and Craters. (Or, Ice and Fire.) From the Myvatn area it is possible to fly in a light aircraft over the glaciers and volcanoes — highly recommended!

Mount Krafla. It is worth climbing up to the crater of Mt Krafla, where there is a ‘solfatara’ or thermal area of bubbling mudpots and steaming lakes. Not far away is the more accessible thermal area of Namaskard.

At Landmannalaugar we stayed in communal wooden huts. You can bathe in a thermal stream (we did in 1988, at midnight — it never gets dark in summer), surounded by these rhyolite mountains.

Ofaerufoss, where a natural bridge spans two waterfalls. Probably no analogues on other planets – but it’s very pretty, and who knows?

At Geysir (from which the name ‘geyser’ originally came) you will see Strokkur erupt every few minutes, as here — and may be lucky enough to see Geysir itself.

Kim Poor and the late Jozsef Minsky at Myvatn

Kelly Beatty making a face on the bus

Dennis Davidson among the basalt

Kim, Ron Miller, Pam Lee, at the hut in Landmannalaugar