Began as a prompt by a professor to create works that would express how my upbringing affected me, and the work that defined the direction of my senior show for college. After several years of recurring dreams of finding abandoned rockets I had this idea that if I were to find one I’d have to build a treehouse in it, but then decided there’d need to be a tree through it first. So I began this drawing as an expression of the things planted in me (and all of us) during the formative years, things that are not supposed to be there. It became the first of many works addressing mental health and the internal condition, and a return to a childlike perspective. I used my favorite rocket – the Saturn 1 block 2 from the Space&Rocket Center in Huntsville as the centerpiece. 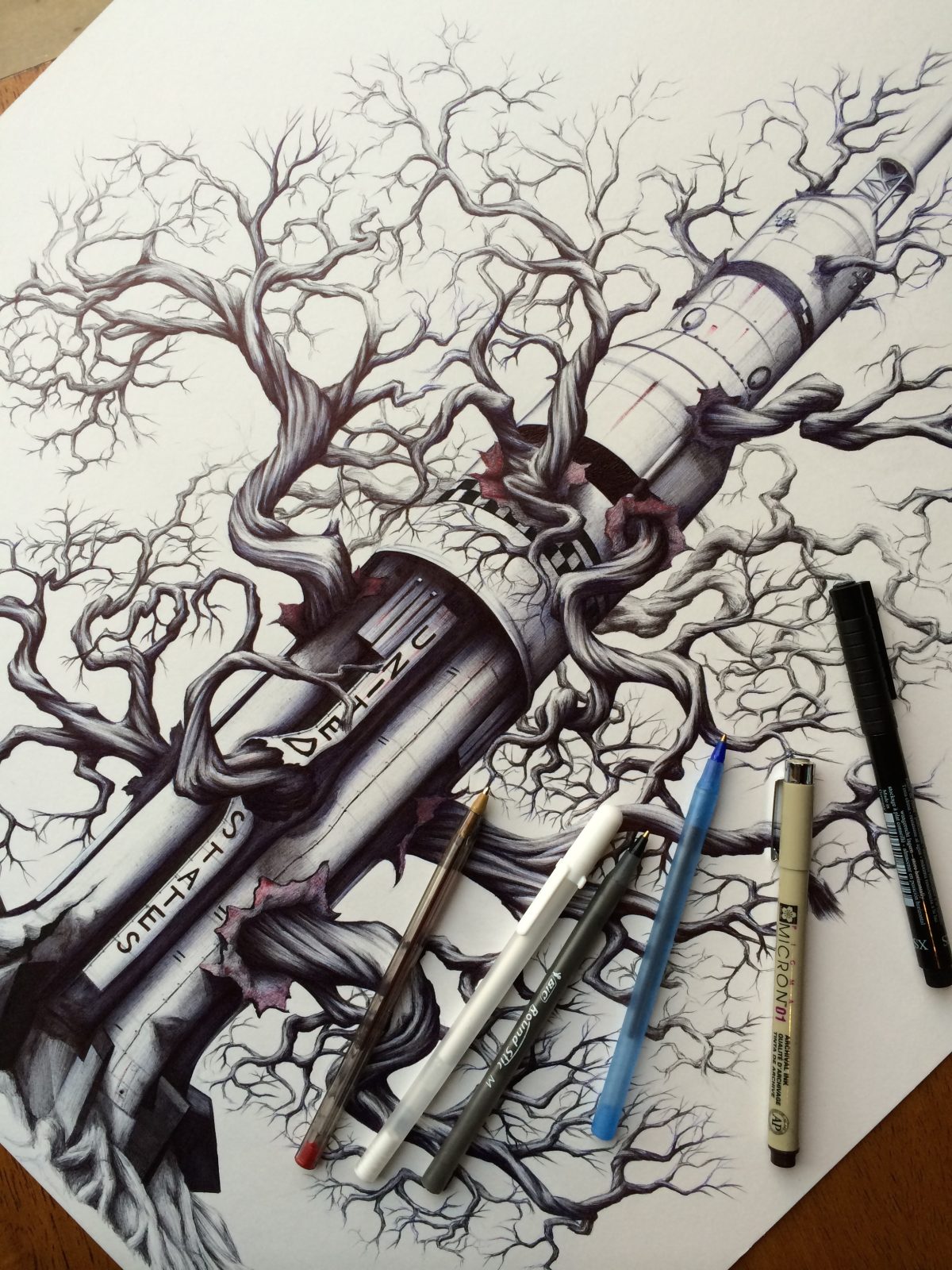 Chris Wade is a Huntsville-native artist who describes his art as astro-surrealism, or Aerospace-surrealism, usually involving abandoned rockets and/or Space Age machinery presented in a dystopian, yet dreamy aesthetic. His main media is India Ink and Acrylic Ink. He earned his Bachelor of Arts in Graphic Design from Athens State University, but was more fascinated with fine art. He became a studio artist at Lowe Mill ARTS & Entertainment in 2016, sharing a studio with David Jolley. He has had two solo museum exhibitions. In the spring of 2019, to commemorate the 50th anniversary of the Apollo 11 moon landing, his painting titled “The Flight of Goose Grissom” was the featured/poster art for Panoply Arts Festival, the annual arts festival of Huntsville. He has won several awards, most notably a Chesley Award for his drawing “Failure to Launch: Grounded” in the category of Best Monochrome Work. His current work serves as a dark and dreamy, yet whimsical commentary on our internal condition, both individually and collectively, as well as a rediscovery of true potential within.

Among his goals is to spark a fascination in the machinery built during an aging space race (both abandoned and preserved), as well as to cause a childlike excitement for where we are headed as a city and on a deeper level as a people. Go to the artist's portfolio

This artwork is copyright © Chris Wade. All rights reserved.