A very simple, very quick, spontaneous finger painting in fluorescent acrylics, inspired by the idea of a planetary nebula, roughly influenced by famous images of the Ring and Helix Nebulae, with a little bit of fine brush work and stars added using the sharp end of a wooden cocktail stick… Size of painting: 25.5 x 17.7 cm on acrylic paper pad, dressed in a floating black frame, circle diameter: 16 cm, frame size: 33 x 33 cm. The choice to use fluorescent acrylics here is partly an aesthetic interest in their hard-hitting intensity and also in some sense to try and evoke a latent inexhaustible energy within all nature becoming. Although this application of fluorescent colour also ties this painting to another one inspired from observing the Sun through a hydrogen-alpha solar telescope, in which I was originally trying to capture the visual intensity of the Sun’s Chromosphere, even while viewed very safely through a protective solar filter. What links these paintings is that a planetary nebula is the long term fate of a Sun-like star like our own; in fact the very first time I saw the Sun through this wonderful solar filter, I could not help imagining the Sun in its Red Giant phase due to the pinky-reddish colour – so it only seems natural that a planetary nebula should come next, linking these paintings through the style of colour application, more visually than the realism that underpins or conjoins them. Also, the brush marks radiating out from the white dwarf (dot) convey the invisible radiance within the visible, rather than implying a “violent explosion” since planetary nebulae form very gently, in great contrast to supernovae from much more massive stars. However, I can say that the arrangement of the colours, with the red on the outside and the blue and green inside, closer to the white dwarf (dot), links this painting to a talk I attended at my local astronomy club about such phenomena. So, the unnatural, partly symbolic representation of colour is still informed by something I learned about planetary nebulae… 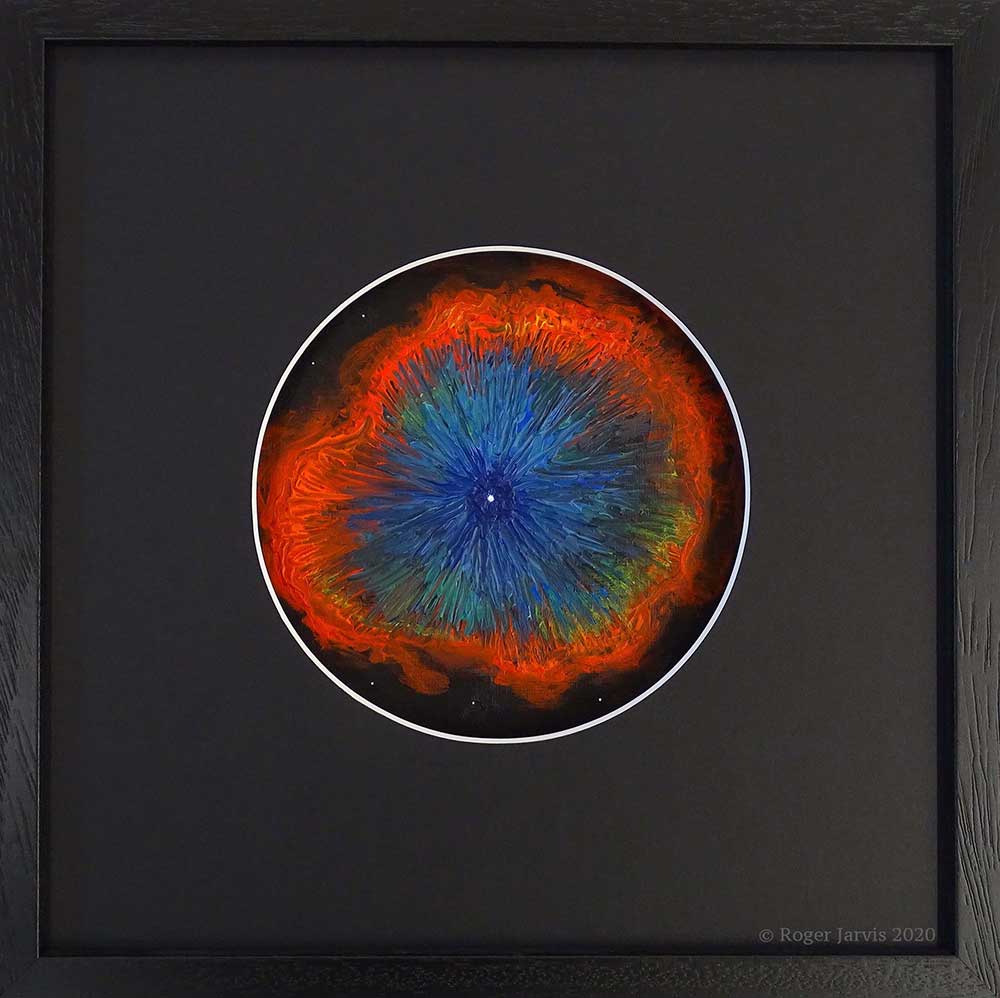