The second space art workshop was held 16 months after the first one in Hawaii, and was organized beautifully by Mike Carroll, who lived in San Diego at the time. It was very much like the first, but this time we had more artists. Death Valley resembles Mars in many respects, from sand dunes to desert landscape, colorful eroded mountains and dry stream beds. Death Valley is where the movie Robinson Crusoe on Mars was filmed in the 1960’s, probably the best Mars film ever done.

Death Valley is nearest Las Vegas, so that is where we many of us rendezvous’d. The California artists caravanned up from L.A. Andy Chaikin flew in to Phoenix, 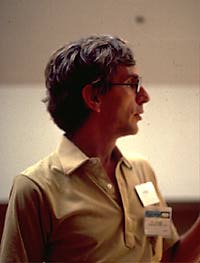 so I drove in from Tucson, picked him up in Phoenix, and we drove the five hours to Las Vegas, high on anticipation. This was to be a huge gathering of the finest space artists on the planet. All the artists who missed Hawaii weren’t going to miss this one. Once in Las Vegas, we picked up a contingent of other artists from the airport, played a few slots (in the airport!) cruised the strip, got some Mexican food, then set out for Death Valley in the evening, two hours away. The workshop took place in November, when the Valley’s horrendous summer temperatures could be avoided.

Our studio home was the Amargosa Hotel, another in a line of the interesting digs the IAAA occupies during the celebrated workshops. The Amargosa lies just outside the Valley in Death Valley Junction, a ghost town which, unlike the silver and gold mining ghost towns of the West, was actually an abandoned Borax camp.

Borax was a hot commodity in the depression-era, and was mined throughout the valley. The famous “twenty-mule teams” hauled the borax to processing plants south. Ronald Reagan hosted a popular TV western series entitled Death Valley Daysin the early 1960s, sponsored by U.S. Borax corp.

The entire town was bought by Tom Williams and Marta Beckett. Marta, an actress and artist, had transformed the largest building in the hotel into the Amargosa Opera House, complete with rows upon rows of audience, all painstakingly hand-painted on the walls by Marta herself. This extraordinary sight was covered in a National Geographic article.

Tom was the concierge, manager, and maintenance man. He managed to put together enough rooms where everything worked to house the artists. The studio/kitchen was a separate building near the Opera House. A number of new technologies made a debut at the workshop. David Cambell, a college art instructor from Canada, brought a camcorder, and documented the workshop nicely. Both Don Dixon and Joel Hagen brought computers. Though the computers were pitiful by today’s standards, Joel had his little Atari 400 reciting random poetry in an alien language! Everyone brought along a camera, art equipment, including a number of tanks for powering their airbrushes. Robert Kline even brought along an enormous telescope.

The first morning, we assembled at Dante’s View, a high, windy promontory which overlooked the valley. Below we could see the alluvial fans spreading from the base of the mountain ranges which ran up each side of the valley. The white “salt pan” covered most of the valley floor, the result of eons of meager rainfall. Across the valley to the west, the snow capped ridge of Telescope Peak contrasted with the dry valley floor. Each of us burned up at least a roll of film here.

One of the first visits of the trip was to the Devil’s Golf Course. This was a closer view of the “salt pan” which we had seen from Dante’s View. It was a craggy, eroded area of pillars of salt stalagmites which stretched for miles. We stopped here because this was thought to resemble the surface of a comet. We walked carefully among the resilient spires, lest we be painfully impaled if we fell.

Zabriskie Point is a beautifully eroded area of mud hills and mountains with colorful beds of sedimentation running through them. We spent most of a day here, with Rick Sternbach and Don Dixon eagerly running down into the depths for a sketching expedition. The bulletin boards at the ramada overlooking the point were the ideal place to post Joel’s “Sand Fire” warning signs.

The Sand Fire posters were Joel’s practical joke for this workshop. Looking very official, and with a plausible text, the posters announced to rookie snowbirds and even experienced tourists that the colorful rocks which make up Death Valley were in fact highly combustible compounds such as potassium permanganate and sodium nitrate. A carelessly thrown match could start an uncontrollable sand fire, destroying all in its path! We posted many warnings at every viewpoint and stop we came to in our first days at the workshop.

We secretly watched as the tourists read with surprise, then quickly and carefully doused their cigarettes. We even watched park rangers through binoculars who would read and re-read carefully, scratching their heads, with the roguish band of space artists giggling from a distance. It was nearly a week before they figured out that this was a prank, and began pulling our many warnings down.

A National Geographic photographer was sent to photograph us, and we met up with him in Furnace Creek, the local town and Park HQ. He treated us all to breakfast while we explored the map for a good area to take a group photo. We decided to head for Artist’s Drive, a colorful section of marbleized rock winding through the south end of the valley.

As the caravan of cars headed towards the destination, we passed an area that looked amazingly like the Viking landing site on Mars. The entire convoy screeched to a halt without any communication (none was needed), we all bailed out, and combed the area, which we dubbed, “Mars Hill.” We spent some unscheduled time here, photographing and sketching, and then headed on to Artist’s Drive. It is interesting to note that our “Mars Hill” moniker stuck, and the Planetary Society and Russia’s IKI are today field-testing the Martian rover vehicle at this very same spot.  Once at Artist’s Drive , we assembled for the group shot, each holding up paintings which we had begun at the workshop.

Tom Williams, our host, was also a pilot, and owned a Cessna, parked in an unpaved airstrip in back of the Amargosa hotel. We all took turns flying with Tom, three at a time. The first thing he would do is fly down the valley floor at an altitude of 100 ft BELOW sea level, which would be very dangerous anywhere else. Here, we were still 100 feet above the valley floor. Then we’d fly high down the length of the valley to the dunes, stopping for fuel at the Furnace Creek airport. Unfortunately, my flight included Joel, who has a cast-iron stomach, and he implored Tom to make some “vomit comit” type weightless parabolas, which he did dutifully, several times. I became very nauseated, but continued to take pictures as a distraction.

The sand dunes were on the north end of the valley, and we arrived in the late afternoon. It was windy, and sand snakes wound their way across the dune faces. The afternoon’s long shadows multplied the relief of the dunes. Rick Sternbach told us that the space shuttle Columbia would pass overhead about 6 PM, and sure enough. We would watch the shuttle land a few days later.

On the extreme north end of Death Valley was our destination for another day trip. Ubehebe (Shoshone for “basket”) is a pyroclastic crater, about 1/2 mile in diameter. Pyroclastic craters are formed when hot magma makes contact with the water table, resulting in a steam explosion. Bill Hartmann and Don Dixon set up to paint. Many of us took photos, sketched, and hiked around the rim. Paul Hudson took an expedition to the floor of the crater. Rick Sternbach put on a makeshift spacesuit and posed for the cameras. I put my red “Mars” filter on my camera and shot Rick in various explorer poses . We spent most of the day “working” this site, and Mike Carroll’s “Io Caldera” captured the scene as he saw it.

Death Valley is only a couple of hours from Edwards AFB, where the space shuttle Columbia was to land, near the end of our workshop. We had made arrangements with the head of the NASA Fine Art Program, Robert Schulman, and he provided passes to get closest to the landing area. We arrived early in the morning, parked on the base, and toured the facilities. The shuttle was to land in the afternoon. We drove to the end of the airstrip, where the press was setting up their equipment, and waited.

Double sonic booms announced the orbitor’s arrival. Columbia made a circle high overhead, lining up with the runway, then descended like a brick, landed, and came to a stop a few hundred yards straight in front of us. The fleet of support vehicles followed soon thereafter. Little did we know that our future colleague, Board member, IT Director and Fellow, B.E.Johnson, was out there on the desert as a member of that support team, walking around under the shuttle documenting first hand for the NASA Fine Art program both the launch and landing of this historic mission that delivered Spacelab I into orbit.

That was the cry shortly after the landing. We were hungry, and headed straight for Barstow for some food. After cruising the main drag a couple of times, we settled on a restaurant, filled ourselves, then headed back to the Amargosa.

During the day, we’d venture into the valley to see the sights. At night, we’d come back to the hotel, shower, eat (Paul Hudson’s wife Cathy was our skilled cook), and get down to painting. A couple of artists, like Paul and Andy, would actually paint in the DAYLIGHT! I’ve got pictures! Most of us preferred to paint at night, and gradually the daylight artists would come around to our way of thinking.

These evening sessions, common to most of the workshops, are glorious. The room quickly filled up with paintings. In the corner were Bill Hartmann and Ron Miller, engaged in sort of a “dueling acrylics” matchup, turning out paintings every couple of hours. In another corner, Andy Chaikin, a gifted impressionist, was giving Carl Sagan lessons to student Joel. All this was being filmed on video by David Campbell. Bob Kline would be testing his airbrush full of Thalo Blue on a plate of dried up spaghetti. I was airbrushing a Martian sky so flamboyantly, I failed to notice that I was also tinting the white window curtains beside me.

Paul Hudson, barely in his 20s, was working on two freelance assignments, one of them for NASA of the Magellan spacecraft near Venus. Paul loaded up his Paasche AB airbrush to do the atmospheric haze. The room filled with the sound of a high speed jet engine from the airbrush, complete with recoil. Rick Sternbach, (now with Star Trek) in the other room, ran out in a panic to see what was causing the whine. “Paul! What pressure are you using on that?” Paul looked at his gauge, “Sixty” he said. “Why? What do you use?” he asked Rick. “Four!” said Rick. This exchange, as well as other similar ones, are what workshops are all about. Everyone would stop painting from time to time, and wander around the studio to see what others were doing, often exchanging ideas, critique, paint and food. The entire genre of space art often takes a quantum leap in quality after a workshop.