A close-up view of the imagined supernova remnant finger painting 1: please see other post for further details on this painting. Someone I showed in person recently (on my phone) recently mentioned a potential issue about the floating circle cutting off or cropping the edges of the painting a little bit too much; I can see a potential issue for this, especially with the nebulous paintings but at the same time, my explorations also inspire me to shift the visual concept to mean more than just a “telescope aperture frame.” This particular comment brings to mind that our experience of reality and view of the universe is indeed very restricted and confined to a narrow “pinhole” experience of what there is, highly filtered by our limited human senses and consciousness; this is the “darker matter” to which the dark frame may also point, preventing us from seeing “the full picture.” Also, what cannot be seen in a photograph, is that the peripheral parts of the painting come into view a little more as you move from side to side, due to the raised floating frame, perhaps commenting on the value of curiosity to peer around the edges of what is obvious and apparent; I can potentially increase this depth as there is room to make it even more “floaty” but I need to watch the drop shadow as it may not be to everyone’s taste (although my framer likes the drop shadow). This drop shadow disappears in low light, when the paintings “come out” … I also find that the 3D floaty effect that people mention often, is completely lost in a photograph. The idea for this effect is for the frame to become either a telescope or a kind of portal into another world. So, the frame is not just something decorative to put the painting in here, often being an essential part of the visual concept within the work and more than just something to help set it off; this is even more true of the works that are inspired from time spent at the telescope, I hope to develop more… The frame has another potential meaning here too: That the meaning of what is experienced, is also framed by the mind experiencing it and, in accordance with this, I have started placing the titles on the backs of my paintings rather than the front, so as not to impose meaning; in other cases, as mentioned by a friend who bought an exoplanet painting I made, he felt like he was seeing the painting “through the telescope of the text” which shows an interesting fluidity in the way I can try to play with either naming or leaving things untitled. Of course, for some things, the only answer is to go bigger and to lose the circle completely, but this is just a little idea on the side that it could potentially symbolise. I would like to go bigger and do things in various different ways of course but the main reason why I do a lot of small paintings is due to the small size of my home studio, meaning I have to work large sparingly for matters of easy storage – and it is also because I am on a very low budget and these circular frames soon mount up when ordering them in batches, particularly if I increase the size. So I either have to work small or spread things out a bit more when featuring this presentation s 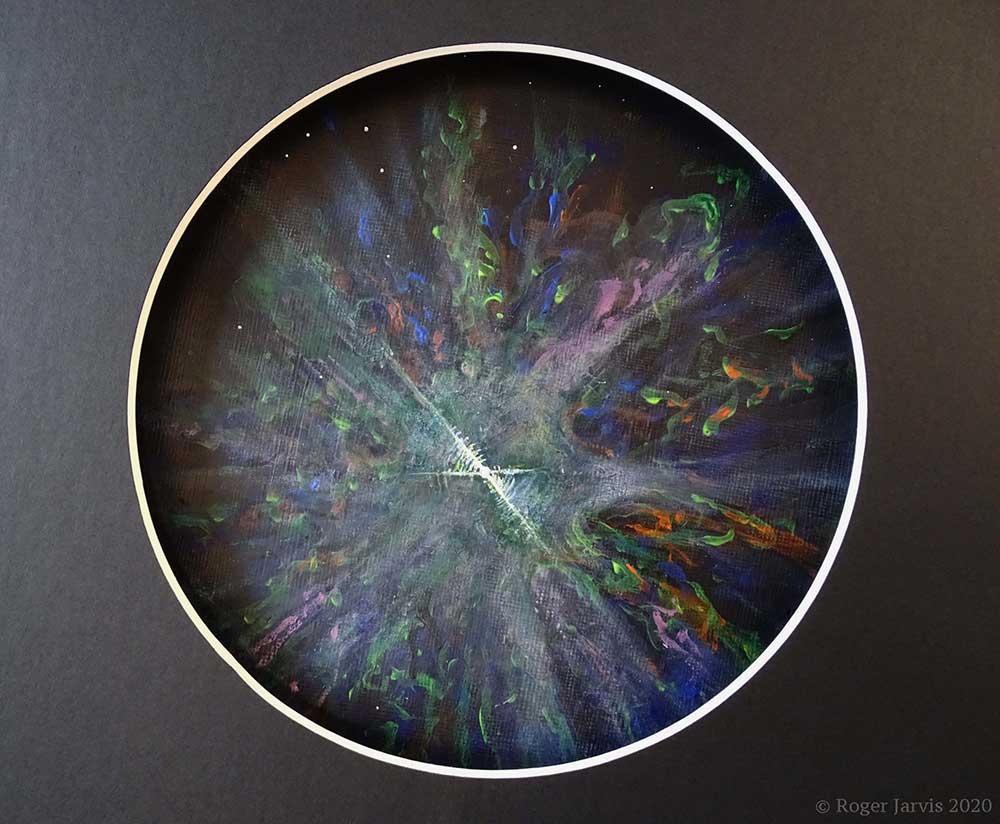