My last Astronomical Art work, became a “New Year Art”, when I put the finishing touches on the work a few hours before year 2023. With this work of art, I wish everyone in IAAA a happy new year.

Far away from home, in the depths of the universe’s diversity and mysteries, we roam a binary star system that piques our interest. We choose to visit the system’s exciting water world, a planet with a super elliptical orbit, and which is now in its perihelium. For most of the year it’s a ball of ice wandering far out in the coldest zone of the system, but now the molten seas are heated and steamed by the stars, which are in a life sequence threatening both themselves and planets that pass too close. The red giant was once like our own sun, but has used up all it’s hydrogen, and is now expanding rapidly with its surface ever closer to its blue companion, which with its powerful gravity feeds on its mass, before the two finally unite in the distant future. Against the reddish surface we also see a small silhouette of a giant gas planet, where it passes the solar disk. The water planet is also now moving through a swarm of meteors, fueling the most adventurous and daring aboard the starship. Here, we see a small family in the open landscape experience the extreme and beautiful sight of magically colored shadows. Nature does not disappoint them, where two large meteors fairly close glow up in the very thin atmosphere before transforming the gentle ripple of the sea into huge waves. 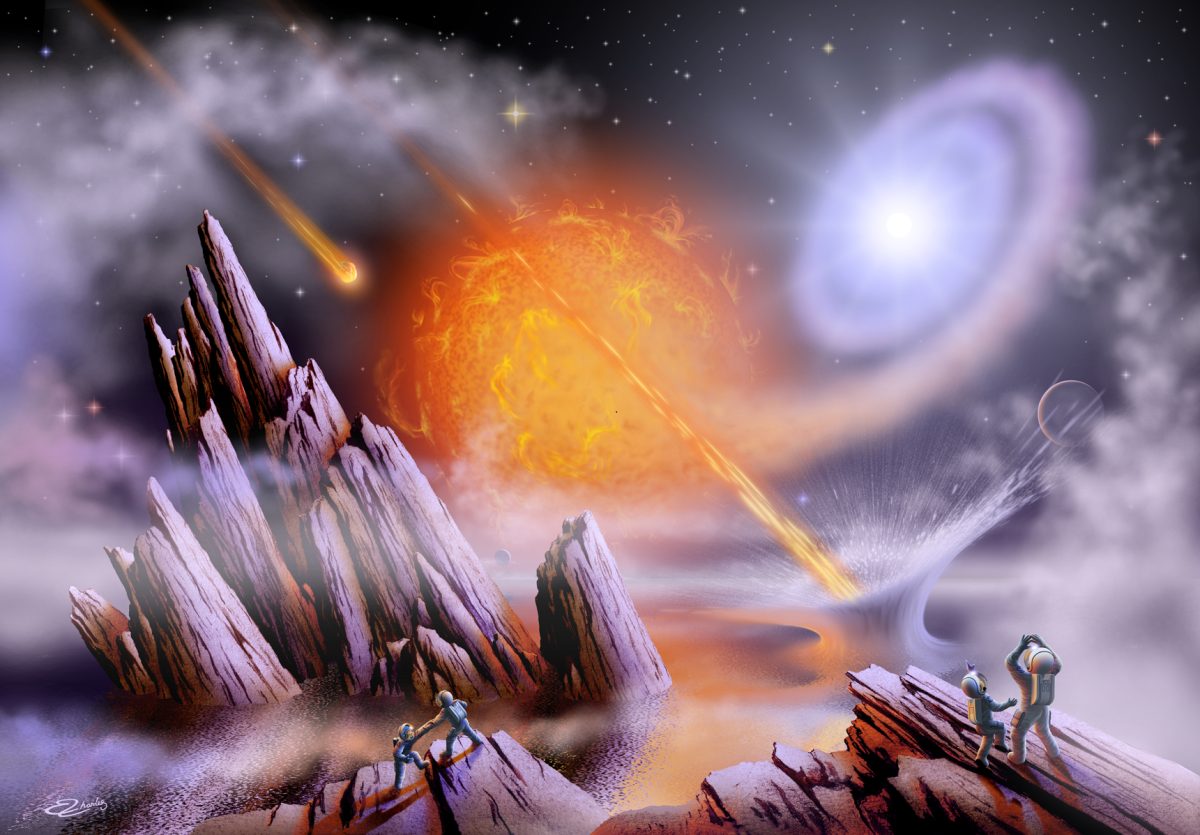 My interest in science started when I was five, when I found a science book soaked with rain water in the forest. I dreamed to be an AstroArt artist since childhood, but I live in a monetary world where money is needed to live. AstroArt didn’t seem like the best business then, so I opted to the next best thing, use my artistic talents on graphic services for advertisement. Now, many years later, I feel that it's time to pay attention to my true passion, where I feel more at home. Creating Astroarts and share it to the world to inspire others to learn more about the landscape beyond our cosmic home, the Earth. I wrote the book “Mr. Nobrain and the Environment” for the same reason. I'm a perfectionist, born before high-tech cell phones was out in the market but nowadays I enjoy a bit of modern lifestyle by spending time in the internet and hanging out in social media whenever possible. Go to the artist's portfolio

This artwork is copyright © Einar Charles Larsen. All rights reserved.