NASA’s Artemis Program, named for the sister of Apollo, aims to return humans to the Moon for extended operations and exploration. This painting depicts the launch of the Space Launch System, carrying an Orion spacecraft and it’s crew on a journey to the Moon. 18″ x 24″, Acrylic on stretched canvas. 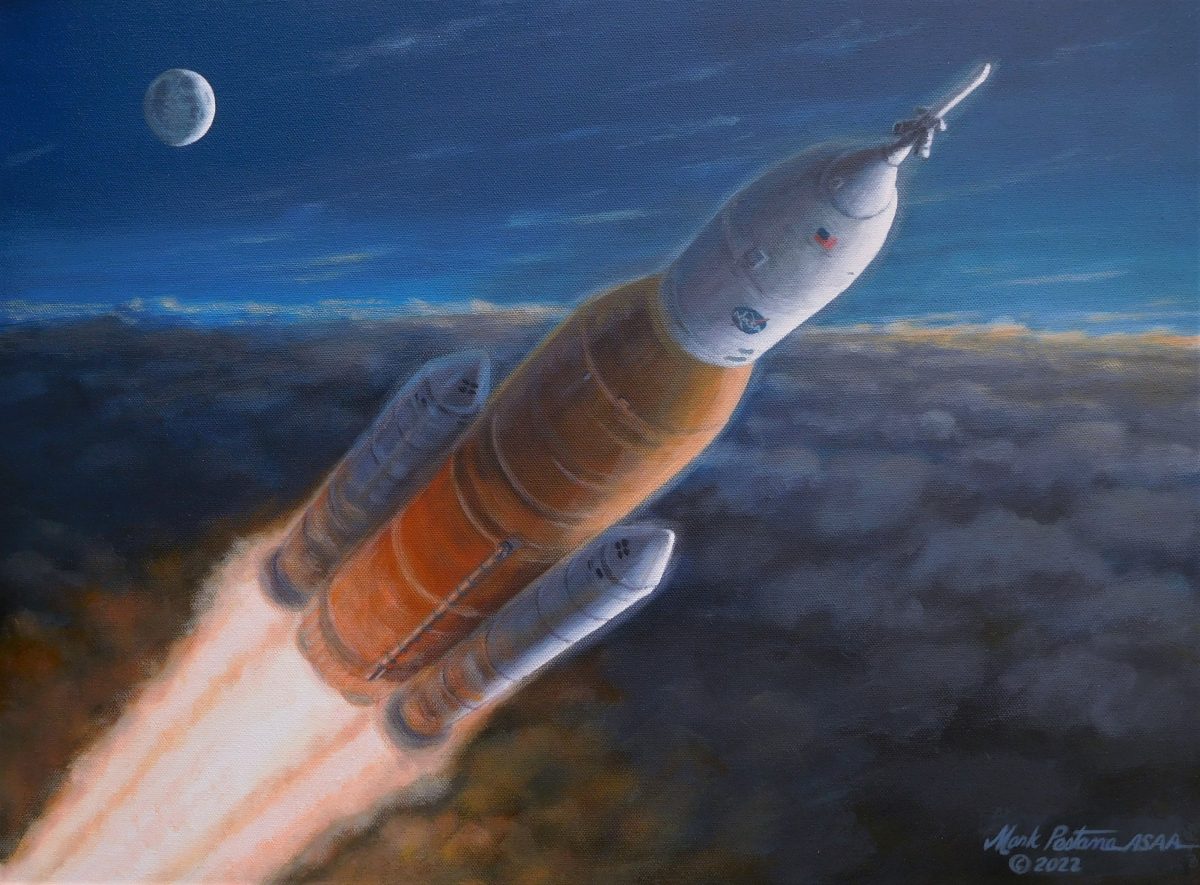 Mark Pestana is a Flight Test and Evaluation Instructor at the USAF Test Pilot School, Edwards AFB, CA. He instructs human factors and Space Shuttle case studies in the Space Test Fundamentals course for US Space Force. He was a research pilot and project manager at NASA’s Armstrong Flight Research Center, Edwards AFB, CA. He also serves as adjunct faculty in the aerospace safety program at the University of Southern California’s Viterbi School of Engineering. He has flown Earth science missions through hurricanes, mapped fault lines, measured rain forest health, and sampled atmospheric pollution. He previously served as a flight crew operations engineer in the NASA Astronaut Office at Johnson Space Center, Houston, TX, developing crew interfaces and procedures for the International Space Station and the Russian Soyuz spacecraft. Mark retired from the US Air Force Reserve as a Colonel, and served as a space operations engineer, NORAD orbit analyst, and as a Command Pilot flying over 5000 hours in over 30 aircraft types, and logging 213 combat reconnaissance sorties. Awards and decorations include the Meritorious Service Medal (3), the Air Medal (9), the Armed Forces Expeditionary Service Medal, and the NASA Exceptional Service Medal. He earned a BS in Natural Sciences and an MS in Systems Management/Research & Development. Mark is a member of the International Association of Astronomical Artists, the Society of Illustrators Los Angeles, the American Society of Aviation Artists, and the U.S. Air Force Art Program. Ten of his paintings are in the Pentagon collection. Among many awards, he received First Place in the 2007 Aviation Week & Space Technology Magazine’s art competition, Space category. He also has the unique distinction of designing nine Space Shuttle mission patches for the astronauts. He is a board member of the non-profit Arts, Science, and Technology Corporation, providing volunteer support and education services in science, technology, engineering, arts/agriculture, and math (STEAM). He is a part-time actor and member of the Screen Actors Guild, appearing in several TV productions and one feature film…so far. Go to the artist's portfolio

This artwork is copyright © Mark Pestana. All rights reserved.