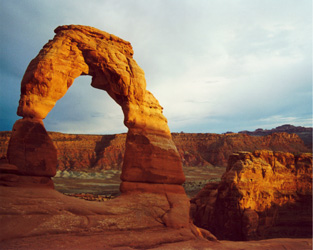 On a rocky promontory overlooking one of the strangest geological formations in the US, thirteen people sketched, photographed and painted in classic IAAA-workshop style. The site, known as Upheaval Dome, lies within Canyonlands National Park in eastern Utah. It has been an inigma to geologists the world over. For years, it was thought to be a collapse feature related to a salt dome, but new evidence indicates it is the root of an impact crater. Upheaval Dome was just one of many sites visited by the members of IAAA’s 1995 workshop. Members sketched the Arches, Canyonlands, and Goblin Valley regions, producing a total of about thirty sketches during the workshop.

IAAA was proven to be alive and well during a workshop at Arches National Park, Utah, on Sept 4-9, 1995. Thirteen members attended, including six who were workshop first-timers. The attendees:

The workshop was organized by Ace Workshop Organizer Mike Carroll.

Several field trips set out from our sumptuous headquarters in the Lazy Lizard Hotel Side. Well, actually it wasn’t too sumptuous; it was dorm style, just right for the IAAA, with a work table that saw evening sessions of painting and kibbutzing. The field trips from the workshop included many sketching sessions in the monument, a trip to view the upheaval dome structure (a possible impact site), led by Ranger Marybeth Maynard, and a trip to Goblin Valley, a formation of lithic “mushrooms” formed by resistant caprock. The most important development was the discovery of the bizarre statistics of double D names in the IAAA, including Dale Darby and Dan Durda, who attended the workshop, and Don Davis and Don Dixon, who didn’t. This anomaly probably explains why Dennis Davidson is president. We think this mystery may be connected with another mystery: 9 out of 13 last names at the workshop started with H or before, and 9 out of 13 first names started with D or before. Vice President David Hardy fits the rule, as does Chesley Bonestell. We don’t think this should be an exclusionary rule for membership; political correctness may require an affirmative action program for alphabetically challenged folks from the last part of the letter spectrum.

Anyway, the cosmos is full of mysteries that have not even been recognized, let alone solved. The traditional critique of IAAA work was held, but because everyone was having such a good time socializing, the critique session amounted to little more than a slide show. Your faithful correspondent realized he was guilty of spouting off about his own slides, instead of shutting up and encouraging critiques from other painters. Perhaps next time a more focused critique, centered around both slides and work done during the workshop, would be helpful, especially to new members.

In addition to a slide show and critique of earlier work, several artists showed their talents as video artists. Carter Emmart showed Journey into Darkness, his film of the 1991 eclipse, complete with musical soundtrack. Carter, Joel, and Andy had just come from Burning Man, a chaotic festival of mad artists and assorted weirdos, held in the Nevada Desert; Carter and Joel showed video footage of this event, a video that seemed to an offspring of Mad Max with Priscilla, Queen of the Desert. (Yes, I am aware that Priscilla was the car, not one of the characters in the film, and I stand by my statement.)

Joel Hagen, Renaissance Entity, showed an extraordinary video he had put together for presentation at a Contact Convention. Titled Deutschland to Disneyland: Enroute to Mars, it was a striking collage of film clips — everything from Peenemunde to Disney’s TV programs of the 50s that featured Werhner von Braun and friends. The film is narrated by Joel and documents the popular history of space travel, and the image of the spaceship in popular culture. More to the point, Joel showed how the *idea* of space travel was fed into popular culture and evolved parallel to evolution of the technical means to create space travel. This parallel evolution created the political climate that made space travel possible. Have we lost it today? Can the IAAA play a role in bringing it back?