In June 1973 a once in a thousand year Solar eclipse event was due to occur across Africa. After lobbying from astronomers and scientists Aerospaciale Concorde prototype 001 was, during its flight test program, dispatched to Gran Canaria with a scientific crew and modified top fuselage viewing panels. On June 30th 1973 Concorde intercepted a full solar eclipse and supersonically transited western and central Africa within the eclipse shadow for 70 minutes. This remains a world record and was an astonishing aviation achievement for a civilian airline prototype. Oil on canvas 90x60cm. I think I accidentally added this as a post rather than gallery earlier 🙁 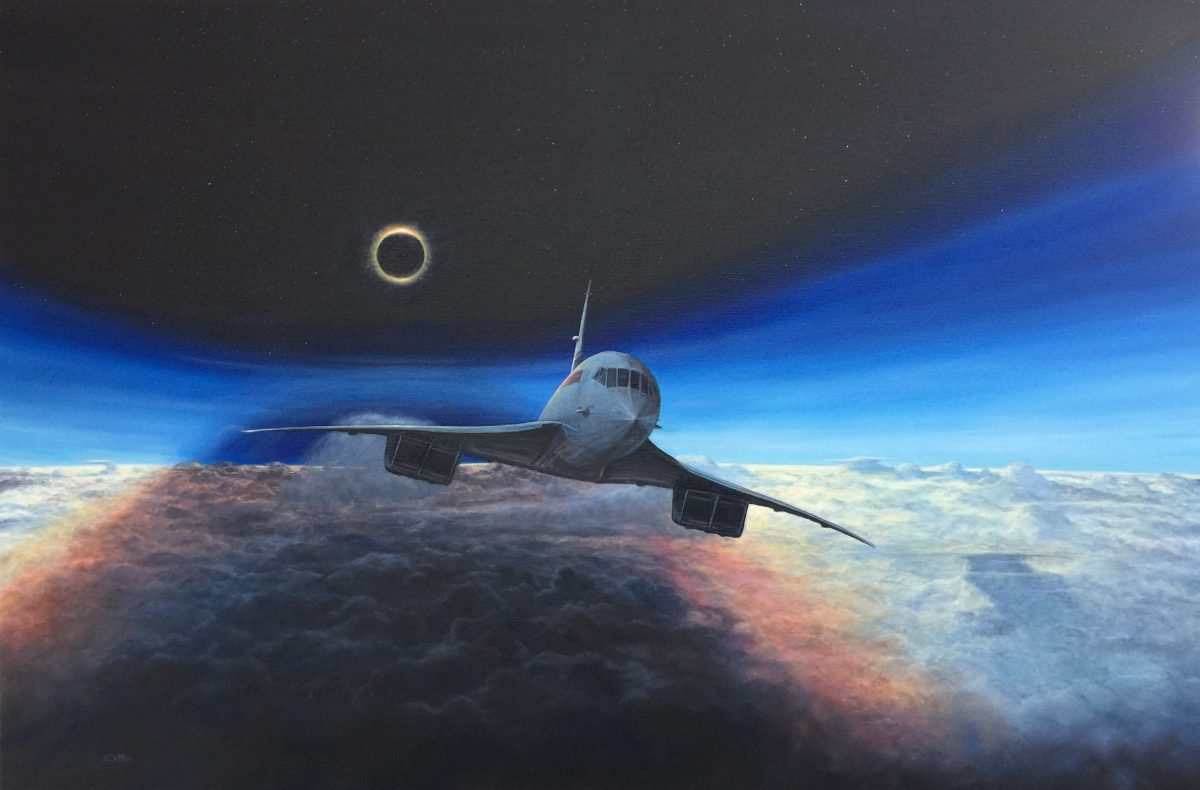 I sold my first painting in 1978, having just completed my Art 'A' level, and I've been selling a wide range of predominately aviation, aerospace and astronomical art for many years alongside my more recent abstract works. I started working with oil paints when I was 13 and it's the medium I love the most; there is nothing quite like the creative anticipation of a large blank canvas to test your imaginative skills and artist quality oil paints give you a fabulously rich palette to work with. As a small boy, I'd been fascinated by all things aeronautical, and it was that constant interest that started me sketching aircraft before I moved onto expressing myself in colour. The aviation art and aerospace art markets have developed tremendously since the late 1970s, largely thanks to the superb works of Robert Taylor, Gerald Coulson and their peers. The standards created by them set the bar for me and many other artists, who are drawn to aviation art and aerospace art individually, or via the Guild of Aviation Artists, which is the world's best established and most respected aviation art association. I'm an associate member of the GAVA and submit work to the annual exhibition in London. Science & astronomy has been a constant interest for over 30yrs, to have so much of our art inwardly focused on a minutely small particle within the fabric of the universe seems almost dismissive of the panoramic intensity of the wider cosmos. In our journeys beyond the stratosphere - art goes first. I've produced numerous paintings of planetary scenes, starscapes, galaxies, deep space nebulas and well-known icons of the space age, such as the NCC 1701 Enterprise, as well as my own future craft designs. The International Association of Astronomical Artists ( IAAA) is the collective "home" for those of us who combine our love and wonder of astronomical themes with expressive original art. We bring you the images the cameras can't get to, I'm an artist member of the IAAA. Away from the easel I'm a keen aerobatic pilot and produce "high energy" cloud top footage filmed from an Extra EA300. Go to the artist's portfolio

This artwork is copyright © Simon Cattlin. All rights reserved.